SPRINGFIELD–Illinois House Democrats on Memorial Day honored the dead by pushing their scheme to tax the life out of the state. Democrats, and only Democrats, pushed a constitutional amendment out of the Illinois House, and on to the statewide ballot. All 44 Republicans in the house voted against the bill, and one lone indecisive Democrat cast no vote at all. The measure will be on the November 3, 2020 general election ballot.

“Democrats came into office promising to tax the hell out of people, and now they are one step closer to their goal,” said Jim Tobin, President of Taxpayers United of America (TUA). “What they don’t get, is that passing the Graduated Income Tax Increase in Springfield was the easy part. If they think they can ram the income tax increase past voters they are mistaken.”

“Taxpayers will have an opportunity to kick these tax raisers out of office in the March primary,” said Tobin. “On March 17, 2020 every tax thieving Illinois House Representative will stand for reelection, and I encourage every taxpayer to vote.” 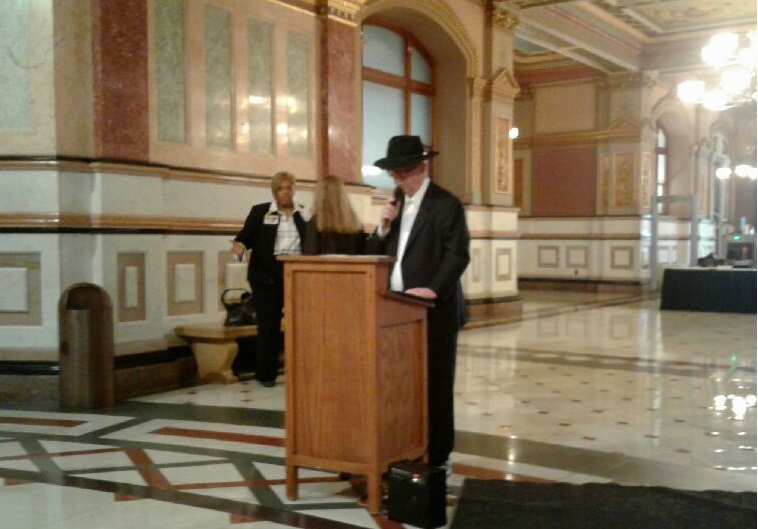 Springfield–Jim Tobin, President of Taxpayers United of America (TUA), and other taxpayer activists staged a protest in the Illinois State Capitol Building on May 21. The protest was held in opposition to the nearly endless demands for newer and higher taxes proposed by Gov. Jay Robert “J. B.” Pritzker and other tax thieves.

Pritzker has promised many new regressive taxes that will largely hurt the poor and middle class. As reported by the Chicago Tribune, some of the new taxes could be placed on ride-sharing, cable streaming, alcohol purchases, plastic bag usage, parking garage fees, cigarettes, electric vehicles, car registration fees and gasoline. These taxes are all regressive in nature, as they take up a larger share of an individual’s income compared to other taxes.

Of all the regressive and anti-middle class taxes being pushed however, the taxes for “road improvement” is the worst scam that Pritzker is pushing. As exposed in a Taxpayer Education Foundation study, a large part of the gasoline taxes collected in Illinois are funneled into the bloated bureaucracy that is Chicago government transit. This money is being stolen from non-Chicago taxpayers to fund lavish government employee pensions and subsidize an obsolete, 19th Century transit system.

“The corpulent con man Pritzker is no savior of the middle class,” said Tobin. “He is determined to pillage the Illinois middle class to enrich the Chicago government class. This is irresponsible and legalized theft on a statewide scale.”

“That is why these grassroots protests are so important, now more than ever. We need to show Illinois government that Illinois taxpayers will resist new tax increases every step of the way.”

Say NO To A Graduated Income Tax Increase

The economic and demographic future of Illinois is now in the hands of the Illinois State House, as (SJRCA1) was approved by the Illinois Senate.

The state is hemorrhaging residents and companies, and if this state income tax increase passes, and is approved by voters, the state will likely never recover. Illinois is circling the drain as we speak.

Gov. Pritzker says that this will be a tax on the “rich,” and that the tax will ensure fairness. This is totally untrue; in fact, the very opposite is the case.

The Illinois Pension Crisis continues to cost taxpayers more every year, and the Illinois exodus has reached historic levels. As it has been shown in the state of New York, wealthy taxpayers will leave because of higher taxes. Passing Pritzker’s Income Tax Increase Amendment will increase the outflow of taxpayers, and consequently lower expected tax revenues. So who will pay when the money taken from taxpayers falls short? The middle class.

This is a middle class tax increase!

The proposed tax increase omits inflation indexing (resulting in “bracket creep”), creates a marriage penalty, and includes a recapture provision that subjects the entirety of a taxpayer’s income to the top marginal rate once they reach that bracket!

Should this graduated-rate income tax become law, rates may climb even higher, and more taxpayers could be subjected to higher rates.

The neighboring states of Indiana, Iowa, Kentucky, and Missouri have all cut income taxes in recent years, while Illinois is headed in the opposite direction. This may be our last chance to save the state from economic collapse.
Taxpayers must call their representative and tell them to vote NO on a tax increase on the middle class.

Representatives should instead focus on reigning in lavish public spending, instead of chasing away their constituents and promote pro-growth reforms to help Illinois prosper.