Illinois General Assembly: A Fish Rots From the Head Down 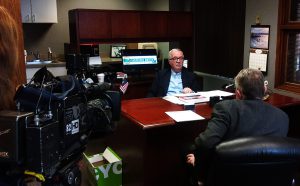 “We are in the middle of our 8th month without a state budget, so there’s understandably an awful lot of discussion about the sad state of Illinois’ financial health presently and how we got here. But we really don’t have to look too far to understand the problem – just look at the lengthy tenure of legislators like Michael J. Madigan (D-22, Chicago) to see how this system continues to this day. To paraphrase one of the most famous lines from Shakespeare’s Hamlet, ‘Something is rotten in the state of Illinois,’ and the rot is clearly from the head down,” said Jim Tobin, founder and president of TUA.
“For more than four decades, Madigan and his ilk have enshrined the theft of taxpayers’ hard-earned dollars in an unsustainable government pension system at the expense of everyone else in Illinois. This is not a retirement system or a safety net for civil servants. This is theft, protected by government edicts and perpetuated by the immoral and unethical tax thieves that shuffle through the revolving doors in Springfield.”
“If Boss Madigan cared one bit about his constituents, we would have had pension reform decades ago, not to mention a current state budget, and then perhaps we wouldn’t have a pension crisis at all.”
“Let’s be clear about what this pension cabal is and what it is not. Six-figure government retiree pensions are not ‘for the children.’ This system isn’t about the ‘poor civil servants,’ and it certainly isn’t about fairness. The government pension Ponzi scheme is about the reelection of powerful legislators, the expansion of their voter base, and the money that pours in from donations,” said Tobin. “Just a quick look at some statistics from the GARS pension data analysis will shock Illinois residents and taxpayers.” 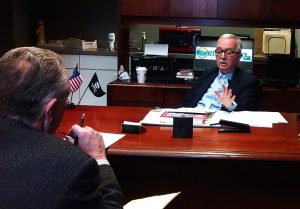 “John Kass of the Chicago Tribune often refers to Illinois’ Speaker of the House as the Khan of Madiganistan, and for good reason. Madigan conducts himself like a warlord and has done so for decades. If he had an ethical bone in his body, he never would have supported the Constitutional Amendment that launched the era of runaway government pensions and began the state’s financial downward spiral. Even after that woeful Constitutional Convention in 1970, the Khan of Madiganistan has had countless opportunities while in his leadership role as Speaker of the house and as a legislator for the past 45 years to limit the perks given to state retirees, much less reform the system that is driving taxpayers from the state like refugees seeking a fresh start.”
“It is criminal that our legislature, under Madigan’s leadership, allows this to continue,” said Tobin. “Part-time legislator pensions shouldn’t be as lavish as our data shows, but unfortunately for taxpayers, this is the financial trouble we are facing.”
“Arthur L. Berman, former Democratic member of the Illinois House of Representatives and the Illinois Senate, still tops our list with a mind-boggling $235,829 annual pension benefit! If that wasn’t bad enough, the lifetime accumulation of those lofty payments will, over a normal lifetime, reach a cool $3.7 million. His contribution to that gold-plated pension was only $109, 293 – less than half of what he will receive in one year!”
“Dan Rutherford, former Republican member of the Illinois House of Representatives, the Illinois Senate, and former Illinois Treasurer until January of last year, is near the top of the list for estimated lifetime payouts. His very generous annual pension of $132,616 will accumulate to more than $4.9million over a normal lifetime thanks to that very lucrative 3% cost of living adjustment. He contributed only $173,209, or 3.5%, to that very rich payout, which is barely more than his annual pension.”
“Jim Edgar, former Republican member of the Illinois House of Representatives, Illinois Secretary of State, and the 38th Governor of Illinois, has collected a substantial chunk of Illinois taxpayers’ dollars since his retirement in 2001. Edgar’s current annual pension – $156,331 – is almost equal to his total pension fund contributions during his time in government, $164,657. The former governor has already collected in excess of $1.8 million and he is on track to receive more than $4.7 million over the course of his retirement. Edgar has also advocated for higher taxes, including hiking the state income tax, to deal with the budget impasse and the government pension fiasco, both of which can be directly traced to his policies and those he supports.”

“It is plain to see the conflict of interest in having legislators, who are supposed to vote on our behalf, benefit from the very system that enriches them and impoverishes the rest of Illinois. There are a handful of legislators in the current General Assembly with some moral fiber who have declined to participate in the pension system, and we applaud their integrity, but that short list does not include Boss Madigan, the Khan of Madiganistan.”
“Are you listening, Speaker Madigan? Where is our budget? Where is the government pension reform? Where do your loyalties lie?” Tobin challenged, “Before the Illinois General Assembly considers even discussing a new income tax on retirement benefits or raising the state income tax, the state’s political elite better be aware that residents won’t stand for it, and Taxpayers United of America will lead the charge against the continued pillaging of taxpayers.”
*Lifetime estimated pension payout includes 3% compounded COLA and assumes life expectancy of 85 (IRS Form 590).
Save