Findings from TUA’s pension project on Grand Rapids, Michigan are featured in the following article at MLive.com. 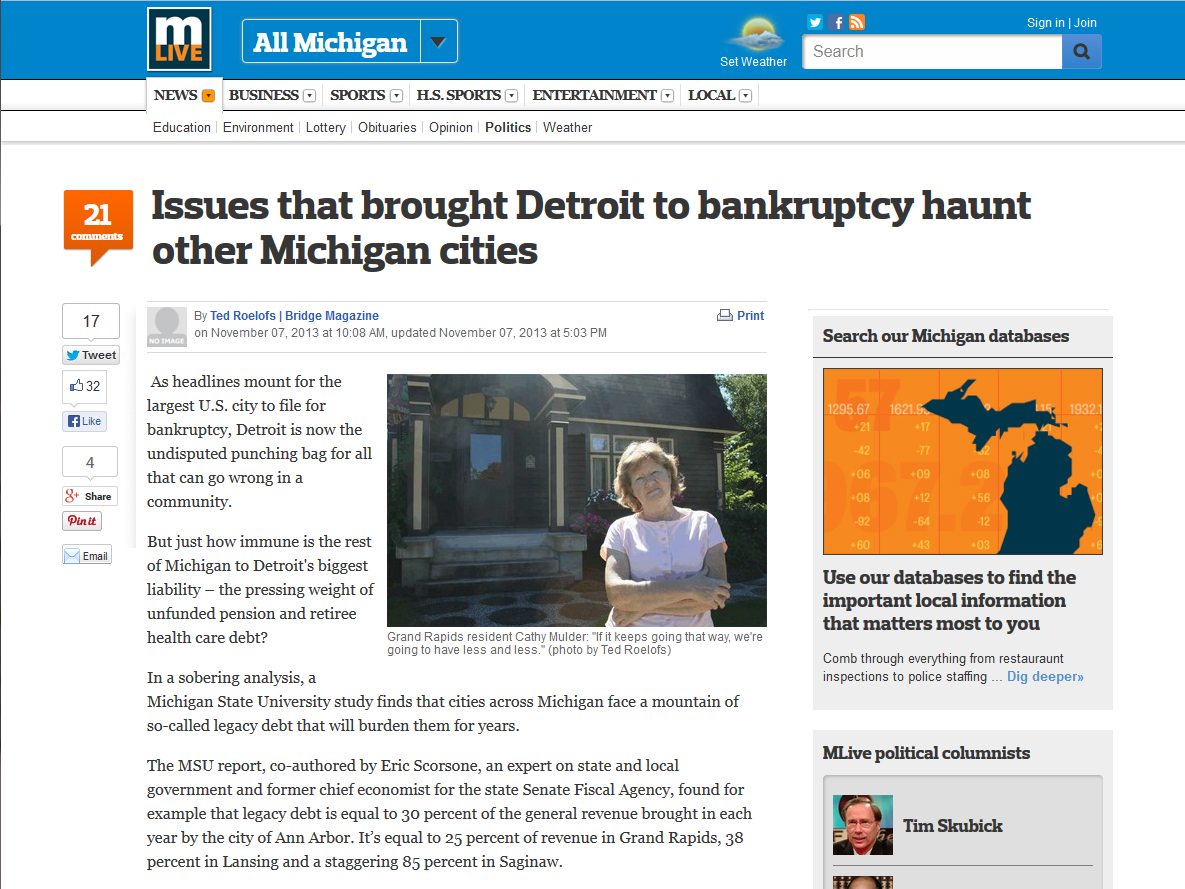 As headlines mount for the largest U.S. city to file for bankruptcy, Detroit is now the undisputed punching bag for all that can go wrong in a community.
But just how immune is the rest of Michigan to Detroit’s biggest liability – the pressing weight of unfunded pension and retiree health care debt?
In a sobering analysis, a Michigan State University study finds that cities across Michigan face a mountain of so-called legacy debt that will burden them for years.
The MSU report, co-authored by Eric Scorsone, an expert on state and local government and former chief economist for the state Senate Fiscal Agency, found for example that legacy debt is equal to 30 percent of the general revenue brought in each year by the city of Ann Arbor. It’s equal to 25 percent of revenue in Grand Rapids, 38 percent in Lansing and a staggering 85 percent in Saginaw.
“It’s not just Detroit,” Scorsone said of the findings, based largely on municipal fiscal data from 2011. “You will find this structural problem in a lot of cities in Michigan.”
Excluding Detroit, unfunded legacy debt in Michigan municipalities exceeded $10 billion in 2011, with nearly 80 percent of this debt tied to retiree health care.
As in Detroit, where unfunded health-care, pension and other legacy costs are pegged at nearly $10 billion, rising debt means less money to spend on everything that makes a place livable: police and fire protection, upkeep on streets, lighting, parks and recreation, or even to cut weeds in vacant lots. Compounding the pain, communities have faced drops in property tax revenue, manufacturing jobs and population along with a $5 billion plunge in state revenue sharing over the past decade.
Which may mean that cities across Michigan could soon face the same heartbreaking choice confronting Detroit: whether to sharply reduce benefits to retired municipal employees earned from a lifetime of labor, or continue to stick residents and businesses with the bill.
In cities like Flint and Detroit, these decisions pitting retirees against taxpayers are no longer being made (or ignored) by elected representatives; emergency managers or bankruptcy officials are calling the shots.
In the absence of bold action, the greatest cost may be to the future of these hardest-hit communities. As cities and towns cut services and raise taxes to pay down this debt and offset falling revenues, they end up driving away the very residents and businesses vital to their recovery.
Who wants to pay more and get fewer services in return?

At the high end of Grand Rapids’ pension scale, retired Fire Chief Robert VanSolkema collected an annual pension of $97,125 in 2011, according to data obtained under the Freedom of Information Act by Taxpayers United of America, a Chicago-based anti-tax group. More than 50 Grand Rapids retirees received pensions of more than $60,000 a year. Average pensions were more modest, $30,000 or below, according to a 2009 report by the Grand Rapids Press.
All the same, longtime Grand Rapids residents like Cathy Mulder note the burden the city’s finances have taken on their neighborhoods.
Mulder, 63, and her husband, Ray, have lived in the same West Side house for 37 years. They have seen the city close a nearby pool where their children used to swim and watched maintenance dwindle at a city park a few blocks away. Streets deteriorated. The city closed the last five of its wading pools this year.
A 2011 audit found that Grand Rapids spends less than $20 per resident on parks and recreation (compared with $49 nationally), and called for $30 million in new funding. Another report found that 60 percent of the city’s roads have fallen into poor condition.
And so city officials asked voters to pay more in taxes to make up some of the difference. On Nov. 5, voters approved a .98-mill tax to pay for park maintenance.
“If you don’t maintain a city, it will look like trash,” Mulder said. “If it keeps going that way, we’re going to have less and less.”
Largest legacy costs per person
Ten Michigan cities with the largest legacy costs per city resident. This is each individual’s share of the currently unfunded bill for pensions and health care and other benefits for retired city workers.

To be fair, with the possible exception of Flint, Detroit’s precipitous fall has few parallels in Michigan. Its population today, at about 700,000, is barely a third what it was in the late 1950s. The median value of a home earlier this year was $11,000. In Flint, population dropped from nearly 200,000 in 1960 to about 100,000 today. Both cities face an enormous debt burden – more than 50 mills per taxpayer – with far fewer residents to pay for it.

Anthony Minghine, chief operations officer for the Michigan Municipal League, warns that many other Michigan communities may see a sharp reduction in city services.
“It’s a simple math problem,” Minghine said. “If you play the numbers out far enough, you will have certain communities where all they will do is hold elections and pay pensions.”
The true dimension of municipal retiree health care costs was not apparent in the United States until 2007, when new government accounting standards required communities to calculate this cost in their annual budgets. The U.S. economic crash that followed – marked by plunging home values and declining property tax revenues – deepened the debt hole.
But the bill for retiree health care was accumulating long before that, as many communities in Michigan and across the nation applied a “pay-as-you-go” formula to fund it. That was sufficient in many cases, before health care costs began to spiral upward. Adjusted for inflation, the yearly cost of U.S. per-person health care skyrocketed from just over $1,000 in 1960 to more than $8,000 in 2010.
Scorsone’s analysis cites 311 cities, villages and townships in Michigan that provided some kind of retirement health care benefits at the end of fiscal 2011, with a total liability of $13.5 billion. Just 6 percent of that was funded, leaving a net unfunded liability of $12.7 billion.
The potential hit on homeowners
The 10 cities with the highest potential homeowner tax burden. Many cities are not fully paying for the legacy costs to come. The “Potential Homeowner Tax Burden” listed below is the annual additional property tax that an owner of a $100,000 home would have to pay to fully cover the coming legacy cost burden in each community.

Cities like Kentwood and Portage in Kalamazoo County were notable exceptions, with their retiree health care debt fully funded.
Communities with large, unfunded health-care or pension commitments have generally turned to three options: raising taxes, cutting benefits or slashing spending. Each has its limitations.
After a decade of job losses and stagnant wages, Michigan taxpayers are understandably reluctant to fork over more money to government – especially when they suspect the money has been misspent.
That is especially true in place like Wayne County’s Allen Park, where voters rejected millages three times in the past two years to recoup $31 million in bond debt tied to a failed movie studio venture; millages city officials said were critical to balancing city finances. In October 2012, Gov. Rick Snyder announced appointment of an emergency financial manager, noting that Allen Park’s fund balance had dropped by more than 90 percent in two years.
In a letter to the city, Snyder wrote that Allen Park had unfunded retiree health-care liabilities of $120 million and $24 million in unfunded pension liabilities. In August, voters finally approved a 3.25-mill millage to maintain police and fire services.
Voters in Benton Harbor on Nov. 5 turned down an income tax hike its emergency manager said should be used to pay down legacy costs that consume nearly one fourth of revenues.
Michigan’s Constitution says state and local government pensions “shall not be diminished or impaired,” so clawing back those benefits from existing retirees seems unlikely outside of bankruptcy. Short of bankruptcy or emergency management, cities have generally been constrained from breaking contracted retiree health care benefits as well.
Detroit emergency manager Kevyn Orr moved in October to strip health-care benefits for nearly 20,000 retired workers effective Jan. 1. The matter is being fought in federal bankruptcy court.
In Pontiac, Emergency Manager Lou Schimmel seeks to cut health care benefits for some 1,200 retirees, a move calculated to save the city $6 million year. That issue remains tied up in court as well.
Stripping retirees of health care – or, at the least, forcing them to contribute to their coverage –could be a template for other financially strapped communities, said Mitch Bean, former director of the state House Fiscal Agency. Bean said cities could move to curtail existing retiree health care benefits through contract negotiations.
“Retiree health care could be eliminated, quite frankly. But politically, I don’t know how you do it. It would take a great deal of political will.”
Jay Krupin, a Washington D.C.-based lawyer and expert on labor law, agrees. He noted the UAW gave up retiree health-care benefits for existing retirees in bargaining to save the auto industry.
“It’s a matter of collective bargaining,” Krupin said. “You can make any decision they (unions) agree to. If you don’t have the money, it has to come from some place.”
State legislation passed in 2012 allows municipalities to issue bonds to pay for legacy debt, but thus far just two entities – Oakland County and Bloomfield Township – have taken that step.
That leaves spending cuts, a strategy all too familiar in Detroit.
Minghine of the Municipal League said that spending cuts – if they are severe enough – can lead to a municipal “death spiral” in which basic services are so reduced that property values decline and residents begin to leave.
“To the extent that the fixes to balance the books diminish the things that make a community a great place to live, everyone leaves,” he said.
“It’s akin to a turnaround expert saying ‘I balanced the books on your business. I did it by closing all your factories.’”
In Saginaw, officials announced earlier this year they would no longer mow most of the city’s estimated 5,000 vacant lots. The city already made deep cuts to its police and fire department.
South of downtown, lifetime Saginaw resident Christina Jones, 78, owns a nicely-kept two-story, 1,400-square-foot home, fronted by an immaculately maintained yard. She can look down the street and see overgrown empty lots in either direction. An abandoned home sits across the street.
Her home has a market value of $20,000 – on paper. But property records indicate nearby homes are selling for closer to $6,000. For this, Jones paid $466 in property taxes last year.
She isn’t about to budge. She can’t afford to.
“I could think about selling my house, but what would I get for it?” she asks. “I’m staying here, if I have to build a moat and put alligators in it.”