Rae Ann McNeilly was quoted in an article by SaukValley.com about TUA’s study on Lee and Whiteside County pensions.

That’s not going to be the case with whatever fix the Illinois Legislature eventually makes to the state’s public employee pension systems. 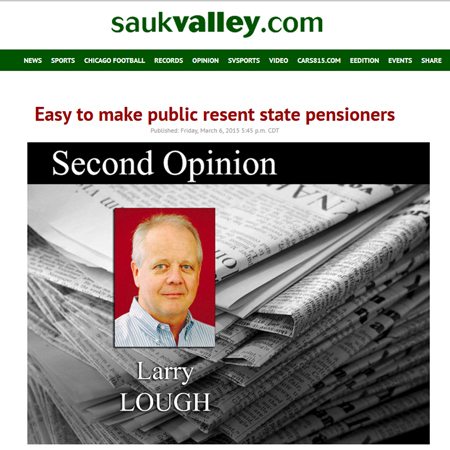 Everybody is going to lose.
Or, at least, nobody is going to win.
That’s what happens when you can no longer ignore a $100 billion unfunded liability.
To be exact, $104.6 billion at the end of 2014.
And growing.
ILLINOIS VOTERS IN November added another name to the list of more than 11,000 government retirees who are drawing six-figure state pensions.
Pat Quinn, who lost his bid for re-election as governor, is now having to get by on his monthly state pension of nearly $11,400.
That’s the government retirement income he earned for 35 years in public life, which included being state treasurer, lieutenant governor, and – for the past 6 years – governor.
That calculates to $136,752 a year.
The anti-tax group Taxpayers United of America estimates that by 2025, more than 25,000 government retirees in Illinois will be drawing state pensions of at least $100,000 a year.
All legal. All proper. All above board.
But pretty ridiculous.
THAT’S THE BIG emotional argument.
The anti-tax, anti-union political forces want to make participants in the public pension systems the bad guys.
“Our study shows that Lee and Whiteside County taxpayers are still being robbed blind by government bureaucrats in the form of lavish, gold-plated pensions,” Rae Ann McNeilly, executive director of the Taxpayers United of America, said in a recent news release.
She called them “thieves,” comparing them to Rita Crundwell.
In fact, about two dozen retirees from local governments in Lee and Whiteside counties – most of them former educators – get pensions of more than $100,000 a year.
Hundreds of others in our community receive state pensions that exceed the average household income of working families in those two counties.
And the average retirement age for those state pensioners is under 60.
Then throw in a 3 percent annual increase – guaranteed – even if state revenues plummet and pension investments tank.
So a little populist demagoguery can easily make the public resent the pensioners.
After all, that money came from taxpayers.
REMEMBER SOME important things about those pensions.
Pensioners are not taking anything they are not legally entitled to have.
They contributed to those pensions, as did their public employers, and they should be expected to earn a reasonable return on investment of that money during the 30 or so years of their working life.
All benefits were obtained through state law or collective bargaining.
Democratic and Republican legislators have, over the years, been almost unanimous in voting to fatten and protect government pensions.
Democratic and Republican governors have negotiated contracts, including pension benefits, with public employee unions.
Unions have done a good job of looking out for the interests of their members.
But all of those players, apparently, ignored the realities of economics and math that make such a system unsustainable unless we unduly punish taxpayers or starve education, local governments, the prison system, and myriad other state programs and services.
Back to Top

TUA’s Rae Ann McNeilly and Jared Labell were featured in a story by WTVO ABC 17 on the release of pension data for Dixon, Sterling, Lee County and Whiteside County.

TUA’s Rae Ann McNeilly and Jared Labell were featured in an article by My Rock River Radio  on the release of pension data for Dixon, Sterling, Lee County and Whiteside County. 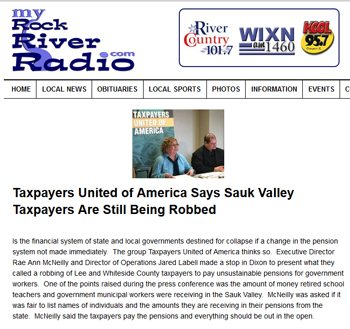