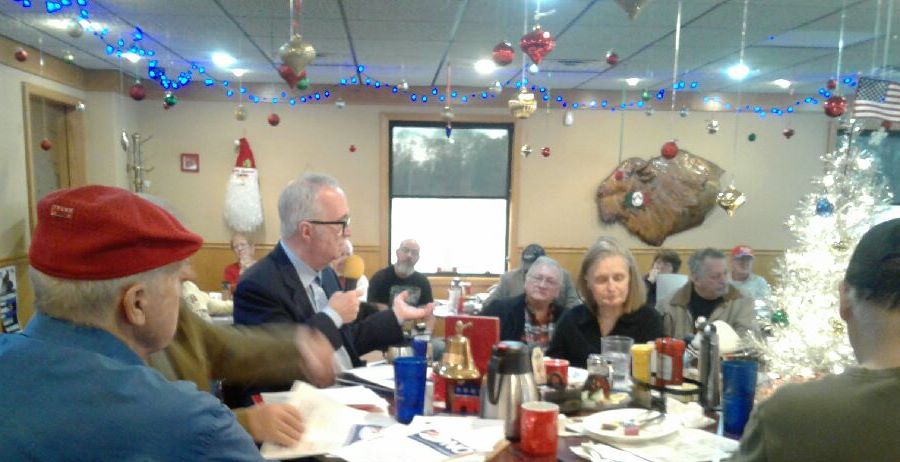 Rock Island – The Ronald Reagan Breakfast Club yesterday hosted a meeting to oppose the graduated income tax increase amendment promoted by Illinois Governor J.B. Pritzker. Invited as a guest speaker to the meeting was none other than TUA President Jim Tobin.

“The graduated income tax is another scam being pushed by lying Springfield politicians,” said Tobin. “The first scam was the Illinois state sales tax, which was sold as a temporary tax to get the state past the great depression. Then there was the state income tax that was promised to provide permanent property tax relief for home owners. After that was the ‘temporary’ toll roads. Now, after passing a $5 billion state income tax increase, Springfield tax thieves want more.”

The Ronald Reagan Breakfast Club meeting was hosted at The City Limits Saloon and Grill. The meeting room quickly became filled, with people spilling over into a second room. In the end, the meeting became standing room only.

“I keep hearing about people leaving Illinois, which is true. However, meetings like this give me hope for Illinois. It shows that taxpayers are ready to fight against these ridiculous tax increases. If Pritzker thinks passing more income tax increases on Illinoisans will be easy, he is sorely mistaken.” 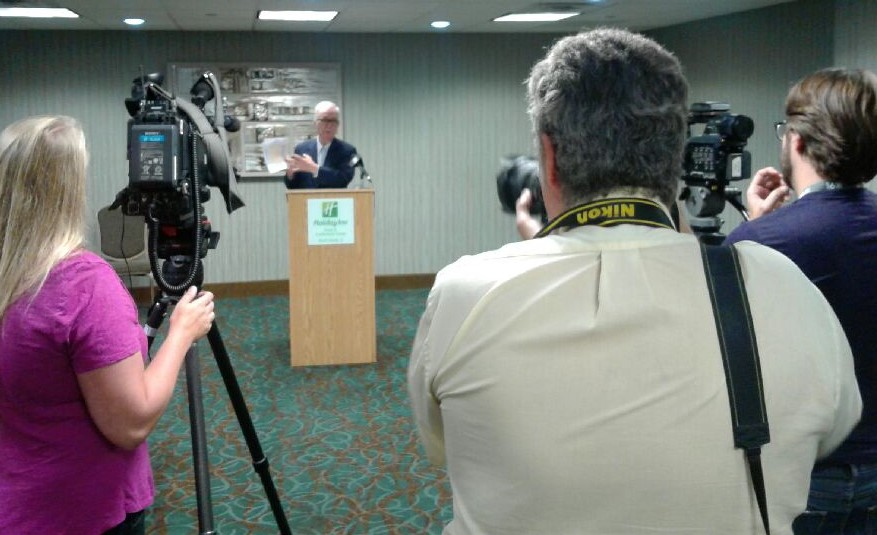 Rock Island County taxpayers bear the burden of millions of dollars in pensions that retired educators and municipal workers will collect for years to come, according to a Chicago-based taxpayers group.

Taxpayers United of America made a presentation on that contention — one of several presentations throughout the state — Wednesday at the Rock Island Holiday Inn.

But a representative from the American Federation of State, County and Municipal Employees, or AFSCME, counters that most Illinois retirees receive only modest pensions.

“On average, these government pensioners contribute only about 5.5 percent to their own retirement payout,” he said. “In the private sector, employees pay 15 percent of every dollar they earn into Social Security for an average pension of only $15,000.”

“We’re talking about the life savings of teachers, police, firefighters, nurses and other public-service workers who live in our communities throughout Illinois,” Lindall said.

Eight in 10 of those workers are ineligible for Social Security, Lindall said. “So, their modest pension is their primary, if not their only, source of income in retirement.”

When they are working, teachers, police officers and other public employees pay significantly into their own pensions, Lindall said. He said workers typically pay 8-12 percent of every paycheck toward their pension.

“The pension debt, which is real, is caused not by employees doing anything wrong; they always pay their share. It’s caused not by benefits being too expensive, and it’s certainly not caused by the few radical exceptions — outliers — that these pension-slashing lobby groups like to trot out,” Lindall said.

The taxpayer group’s Labell gave examples of local retirees with pensions near or surpassing $100,000, including Calvin D. Lee, former superintendent of Moline-Coal Valley School District, who according to the taxpayer group’s research, receives $197,826 in annual pension payments.

AFSCME’s Lindall said the pension debt was caused by legislators who didn’t set aside enough money to pay benefits. “It’s regrettable that they (the taxpayer group) attract any attention at all. They’re not adding anything productive to the conversation.”

He said it’s important to understand that the problem is the decades-long failure of politicians at the state level to set aside adequate resources.

“The answer is ending that practice and for the state to pay what it owes,” Lindall said. “Many people have talked about ways to make those costs more manageable — for example, re-amortizing the pension debt — a mathematician’s word for refinancing your mortgage.”

Creative and constitutional solutions like that that should be considered, Lindall said.

The taxpayer group’s Labell suggests putting new state employees on a 401(k) retirement plan. He emphasized that he is not demonizing people who receive pensions. Pointing out what someone is making through a pension “puts a more ‘real’ spin on it,” he said.

The average person’s Social Security pension is $15,000, he said. Compared to that, the pensions he discussed “are just astronomical,” he said.

“We are technically these peoples’ employers,” Labell said. “I think we have a right to know this information.”

Taxpayers United of America calls itself a “pro-taxpayer, nonprofit, non-partisan organization,” Labell said, adding that the organization is “not indebted” to any political party.

AFSCME represents mostly public employees at all levels of government and is the largest public employee union in the country with 1.4 million members.